Multidisciplinary Teams: Why They Are Needed

Almost a decade ago I had the chance to witness one of the greatest Canadian partnerships watching my then boss, Minister of Defence Bill Graham and General Rick Hillier, Chief of Defence Staff in action. Some said the newly appointed Minister, a man of old-school diplomacy was more suited to his previous portfolio at Foreign Affairs and would not work well at National Defence where the outspoken Rick Hillier, author of “A Soldier First” was just that, a soldier first with little time for politics. Counterintuitive as it was, these two men so unalike would produce some of the most collaborative defence policy Canada has seen in a time of conflict.

On one occasion I observed the two men in a conversation that would lead to the creation of the Strategic Advisory Team (SAT) in Afghanistan. It was a unique, multidisciplinary team that tried to address both the lack of security and good governance by placing military and foreign service officers together in government Ministries to advise the Afghan Government directly on things like reform and education. Later, I would be tested myself on the realities of a civilian-military approach while serving with Joint Task Force Kandahar. The challenge of civilian-military cooperation extending from the reality on the ground all the way up to the political level is a difficult one. When a gap or difference of opinion invariably opened, I was reminded that Bill Graham and Rick Hillier somehow made it look easy.

I would remember that their partnership worked precisely because they were so different. They spoke each their own language to produce a level of coordination that present day conflict demands. With the advent of a digital revolution, the battlefield has only gotten more complicated. The information battleground has presented an increased need to understand and respect the interplay of internet technology, social media and geopolitics. It is an interplay that violent actors like ISIS have found easy to exploit. Their resulting pressure is as much locally destabilizing as it is geopolitical, forcing governments to respond. Now more than ever the response must be proportionate and coordinated among all participants. 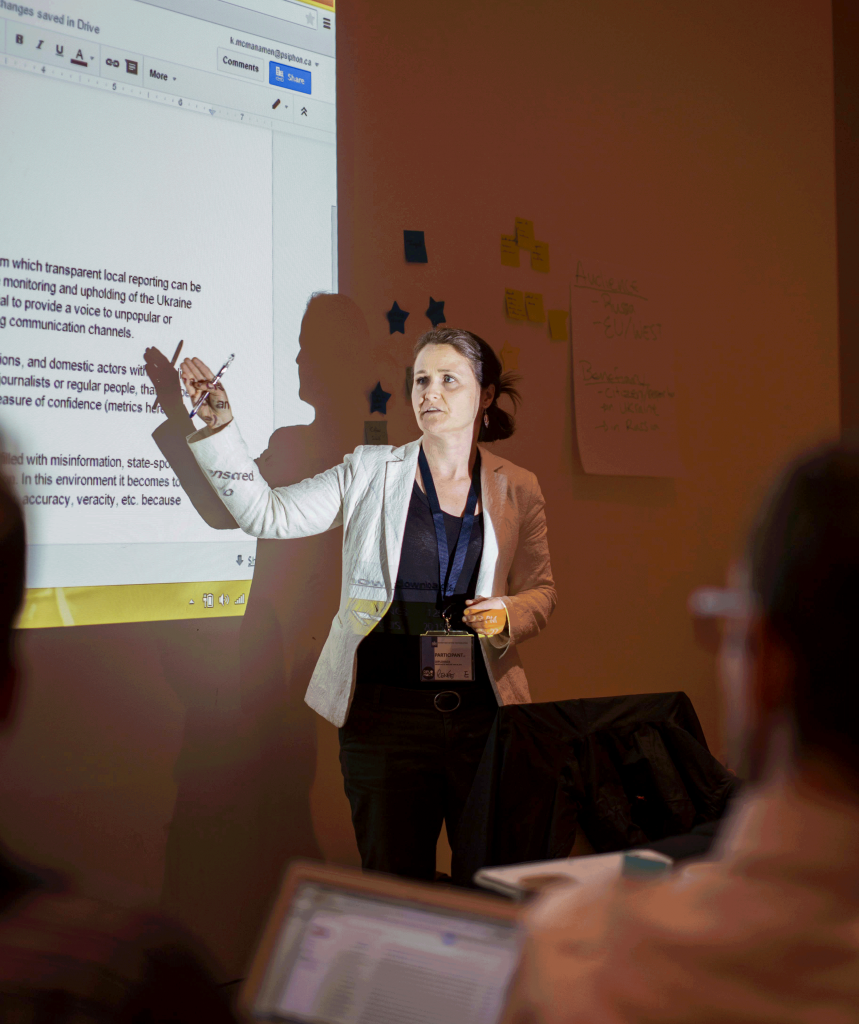 I was reminded again of these lessons during a two day ‘hack’ sponsored by the Dutch government and hosted by The SecDev Foundation. Our host, Rafal Rohozinski of SecDev opened the two day event by telling us why we were all there. More than half of those on the internet are under 35 year of age and the fastest growing populations of internet users are from fragile or failing states. To them, technology is a real resource to overcome impediments to change. Further, violent actors are some of the most innovative organizers in cyber space. Our mission; use new technologies to empower those caught in conflict. Specifically, leverage technology to help enforce United Nations Resolution 2202, the cease-fire in Ukraine.

In the room, diplomats, military, technologists and information specialists, and influencers both in and outside government (some sporting a black dot as an indication of their need to remain anonymous). Multidisciplinary teams were constructed purposefully to balance hard and soft skills, and kinetic with non-kinetic experience. Some with expertise in technology, some with considerable experience managing the geopolitics of conflict. In short, if a coordinated approach is needed, this is the first time I have seen everyone show up. Most importantly, participants calling in from Syria and Ukraine currently in conflict left no question that what we were going to try to do – was real.

Presented with impromptu opportunities to pitch ideas to decision-makers including Foreign Ministers, we were expected to repeatedly account for our decisions, and make the case on sound technology and realistic policy from the ground up. Finding the balance the evidence-based technology, and explaining how that technology would be used on the ground with an eye towards UN Resolutions and greater good became the clear difference between those who were successful versus those of us who failed. Applicability in present day conflict was the dealmaker.

Canada has earned significant experience in conflict over the past decade along many disciplines as evidenced by those of us who came together for this event. It is heartening to see the Department of Foreign Affairs as a key supporter. Yet departments have shown a danger of falling back on old fault lines. It is instructive that President Obama has addressed this danger in the US by establishing the Centre for Strategic Counterterrorism Communications (CSCC) to coordinate, orient and inform government-wide foreign communications activities targeted against terrorism and violent extremism. Ironically, the coordinators’ mandate is described in formerly Canadian terms. He “leads an interagency staff drawing on whole-of-government knowledge, skills and resources.” While we could be wise to start there, one step further #DiploHack has proven that private sector actors have a clear role to play.

The information age and new technologies have brought us all closer than ever – violent actors included. Along with that is a need to innovate and apply solutions rooted in technology, applicable in the battlefield with support from governments, the private sector and multilateral frameworks. At least one of the ideas from from this hack may be executed and we are assured is being discussed in Brussels. Regardless, the event proved once again that in the prescient words of retired General Stanley McChrystal, “it takes a network to defeat a network.”

Renee Filiatrault has served as Senior Public Diplomacy Officer in Afghanistan with Task Force Kandahar. Before that, she served two Ministers of National Defence and was Head of Media and Public Affairs for the British High Commission in Canada. Renee is a regular commenter on foreign and defence matters, appearing on CTV’s Question Period and PowerPlay, as well as on CBC’s The National with Peter Mansbridge and CBC Radio and has been a contributing writer for Policy Options Magazine and the Ottawa Citizen. Renee holds an Honours B.A. in Political Science from McMaster University and has been accredited with Information Operations training from PSTC Kingston. Renee is fluently bilingual and currently lives in Ottawa. In the private sector Renee continues to advise public and private sector clients on their communications strategies concerning foreign, defence and security matters. She is also a Professor at the Algonquin College School of Media.
Category : About The Event
Tags: #HackingConflict, Renée Filiatrault