Hacking Away at Conflict

The big room is filled with about a hundred assorted folk, obviously working hard at something, and most of them clustered in groups of about a dozen around work tables; several large flat screen monitors, showing an ever-changing series of presentations, video clips and a variety of other things; a stage faced by a handful of chairs; more presentations and shots of collaboration software projected on all the walls; and occasional visits by dignitaries including royalty. From time to time, energetic music comes from speakers, occasionally interrupted by advice and exhortation. In an anachronism somehow reassuring, a young, digi-savvy participant is copying something from a computer screen onto a piece of paper, using a ball point pen. What’s going on? Where are we? 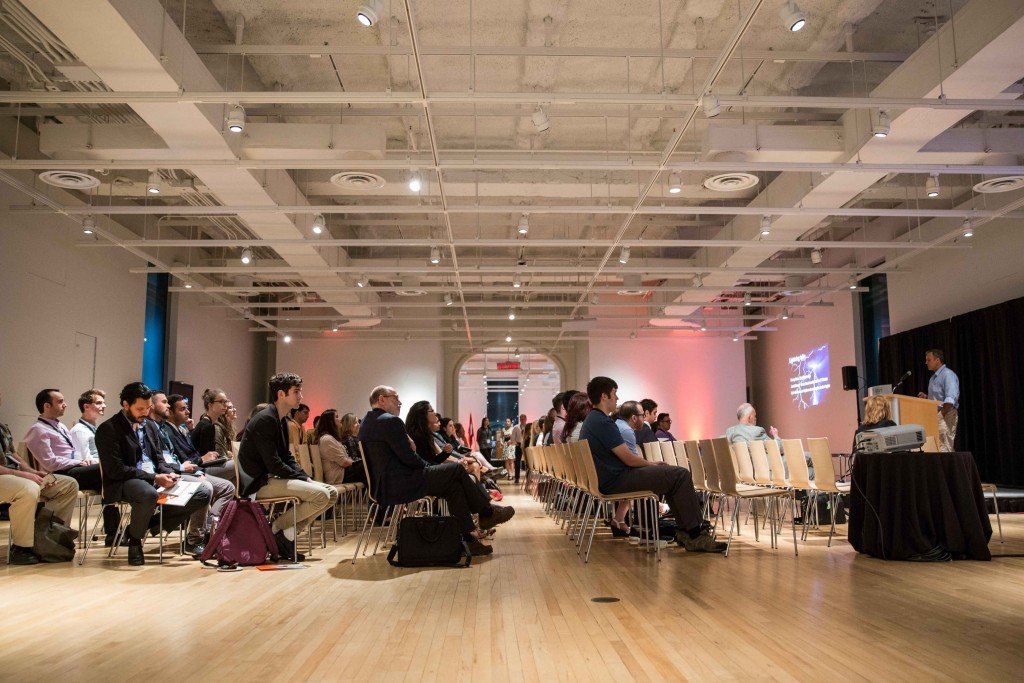 Author Philip Bury taking it all in at the front row.

We’re on the third floor of Ottawa’s Victoria Memorial Museum Building, which once housed the Parliament of Canada, and now the Museum of Nature. We’re in the third-floor exhibition room, a modern space in an old stone building.

We’re participants, organisers, facilitators, helpers of various sorts and occasional visitors, in an event called HackingConflict. One of the DiploHack series, this is a competition intended to

explore how youth and technology can disrupt conflict and empower nonviolent activism amidst the maelstrom of war.

HackingConflict, which took place on 27 & 28 May 2015, was jointly sponsored and conducted by the Embassy of the Kingdom of the Netherlands, (as a gesture of thanks to Canada on the 70th Anniversary of the Liberation of the Netherland, largely by Canadians) and The SecDev Foundation, among other partners.

The competitors were a mixture: mostly “digital natives”, who have never, or almost never, known a non-digital world; with a handful of older crafty people with varied relevant experience; and a few in between. Teams of 12 to 15 have been challenged to apply social media and related tools to: defeat the use of barrel bombs in Syria; to support the ceasefire in Ukraine; or to empower women and end violence against them in world trouble spots. Competing teams were to be judged on Clarity, Risk Assessment, Supporting Evidence, Do-ability and Disruptive Innovative effect.

After background briefings and some very necessary hand-holding by facilitators and coaches, the teams set to work, through the afternoon (evening for a few) and into the following afternoon. Mini-briefings to the coaches provided helpful feedback, and late in the afternoon of the second day each team presented its idea to the judges. While the judges deliberated, we were honoured with a visit by Their Majesties, the King and Queen of The Netherlands, in Canada for the Liberation Anniversary. They visited and were briefed by the various teams, a thrill to all, especially the briefers. The award was then presented to the winning team by His Majesty. After a few closing words, the players and helpers dispersed, tired but satisfied, winners or non-winners.

HackingConflict was challenging, stimulating, and lots of fun, certainly to this writer and no doubt to all participants. Enjoyable as it was, it had a serious purpose. All the ideas presented were imaginative, well founded and conceived, and persuasively delivered. It can reasonably be hoped that some at least of the proposals will be further developed and implemented, and go some way to making the world a better place. The event and the proposals that came out of it should also focus the minds of infotech-savvy, social media-savvy, developers and entrepreneurs – maybe even of politicians and society – on the potential power of social media to solve many of the world’s grave problems.

For this, the participants and society in general have much reason to be grateful to the sponsors, the Embassy of The Netherlands and the SecDev Foundation, not only for the enjoyable event but for this contribution to a noble cause.

Philip is a retired soldier and peacekeeper, and a Certified Management Consultant. His strengths include team building and leadership, policy analysis, facilitation and mediation, training, coaching, exercise and experiment planning and leadership, functional and business process analysis, and project management.
Category : About The Event
Tags: #HackingConflict, Philip Bury